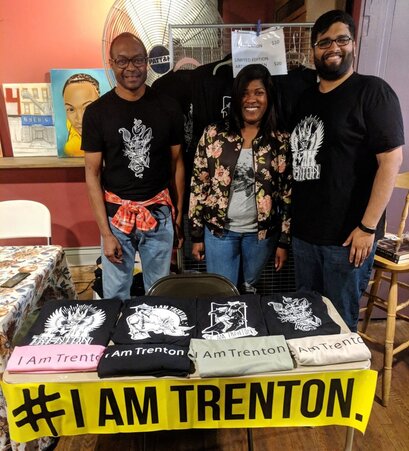 “We know Trenton has challenges, but we also know the resourcefulness and accomplishments of our fellow Trentonians who make the impossible real every day. We’re proud to stand with them and say, ‘Yes. We are Trenton,’” Ingram notes in a statement.

She says the initial billboard project was one of the group’s early actions to help promote attention. And while they know it brings positive awareness to both Trenton and community members, they had to wait for several years to promote another campaign.

Ingram says the billboard project’s fundraising and planning are labor intensive. “They take a lot of energy. We arrange for local photographers and do all the production and put up the billboard. That’s the work of an advertising team.”

She credits the success of the 2017 campaign to IAT vice president and past treasurer Iana Dikidjieva. She is the former interim director of the Trenton Downtown Association and coordinated Isles’ Restoring Trenton project that created a survey of vacant city properties.

“Dikidjieva got the grant from Janssen Pharmaceutical and took off with the concept,” says Ingram. Additional funding came from the Investors Foundation, Roma Bank Community Foundation, and Isles.

Ingram prefers to see beyond the billboards and says people outside or even inside the city often miss the positive efforts of the people in the community. As evidence she points to young entrepreneurs including photographer and educator Bentrice Jusu’s work with city youth, Elijah Dixon opening up a business and starting a collective on East Hanover Street, and Wills Kinsley’s various bicycle-related projects.

“I Am Trenton has eyes on the ground,” says Lewis. “We see projects that are happening in places that state workers are told not to go. We work with everyone from what people consider more troubled neighborhoods or add to organizations like the Catholic Youth Organization. We’re not funding the projects that have a lot of money coming in. We’re funding small projects that wouldn’t happen. One of the strengths is that our board is diverse enough and connected enough that we have our ears to ground and bring ideas to the table.”

Ingram says one of the community development initiatives IAT started was having workshops where they invited potential applicants to share ideas to improve the community. “They turned (the workshop) into a session of community problem solving. Before we gave out money people were pulling together resources to make their neighborhood better.”

That IAT money comes in several different forms. One is the basic IAT city wide grants. Applications are released in June, due in July, and announced in August.

Ingram again credits Dikidjieva for IAT’s involvement with those two other projects. Dikidjieva saw IAT had already developed a fair and equitable grant review practice that could be used rather than duplicated by other groups. IAT was then involved in a pilot project that now continues. “It is a great example of community growing,” says Ingram.

The growing number of projects and the recent billboard campaign also caused IAT to grow and hire a regular consultant, Lori Johannson. In addition to serving as the initial manager of the Greenwood Avenue Farmers Market, the Trenton resident is a visual artist and bassist for one of the city’s prominent rock band, Molly Rhythm.

Outside the subcontracted grants, IAT’s current general budget hovers at $20,000. While small in comparison to other foundations, it shows continued efforts to surmount one of Trenton’s major obstacles: a diminished business community and limited funding sources.

Ingram says, “We get a lot of small donations, a lot of checks for $15. (Yet) when people give us that $15 or $5 they’re investing in their neighborhood. And that may be all they have to give. And we would like people to invest in that.”

Janssen Pharmaceutical and Investor’s Foundation supported the 2017 billboard campaign and New Jersey Manufacturer’s has committed support for 2018, 2019, and 2020.

The small step approach actually seems to be part of the group’s history when it started in 2007. 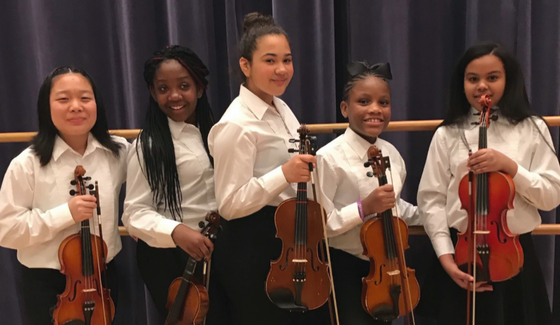 The Trenton Music Makers Orchestra
“The idea of I Am Trenton came when during (Mayor Doug) Palmer’s administration,” says Ingram, adding that it was connected with then-Trenton recreation director Sam Frisby’s need for an increase in recreation funds. (Frisby is now a Mercer County Freeholder and Trenton YMCA executive director.

The IAT website shows the broad group of city and community people who created the initial board and connected to the various communities. “We started as Capital City Community Foundation,” says Ingram. “I Am Trenton is the registered name.”

No matter the name, the group started its first round of small grants, $3,500 total, and a public project. “Christine Palmer came up with the billboard campaign,” says Ingram, adding, “I have been involved from the get go. We’re fortunate to have people who are here for the right reason.”

Interestingly neither she nor Lewis is from Trenton.

Lewis, who is employed by the Flemington Free Public Library, is from Millville, New Jersey. His mother was a teacher and his father a probation officer. After attending college in South Carolina, Lewis ended up in Albuquerque, New Mexico, where he met his future husband, Steve Slusher. “He was part owner of a pharmaceutical firm that got bought up by a Princeton company, and we moved to Central New Jersey. I wanted to live in a city that was not part of a megalopolis. That left us with Trenton, Atlantic City, and Camden. We fell in love with the housing stock in Trenton.”

“I am from Waltham, Massachusetts,” says Ingram, whose father ran an insurance business. She says she first came to the area to take a job at Mathematica Policy Research in Princeton and met her future husband, Ray Ingram, an IT consultant and owner of the software and service company Dathil.

“He was living in Mercerville, and I didn’t want to live there,” she says. “We got a lovely in a house in Trenton, and here we are 31 years later.”

In between then and now was a stint at Mathematica in New York City, a change in careers, and the launching of her own decorative arts company, Kelly Ingram Finishes.

She says she left Mathematica after a friend introduced her to the Isabel O’Neil Studio, which specializes in teaching traditional techniques to create painted finishes that imitate exotic and luxurious materials. Now 28 years later Ingram has clients in Princeton, Hopewell, and Boston.

Lewis says he got involved with IAT because Ingram asked him. Another reason is family legacy. “My ancestors lived in the Trenton before the 1860s — they just sort of pop up as part of the Trenton community involved with building Mt. Zion AME Church. My grandmother left Trenton to live with my grandfather (in southern New Jersey). I used to visit Trenton until the riots and then stopped coming. I have fond memories of Trenton — like this is where my family comes.”

Looking forward, Ingram says, “We’re going to celebrate our 10th anniversary all 2019 and have lots of parties and Trenton talks and community forums.” Instead of a big gala, IAT is in the process of doing a series of small events designed to help the group keep stepping forward to some strategic goals. That includes the addition of more board members who can embrace IAT’s mission and spirit and help increase its budget to $75,000 by 2020 and reach deeper into the community, especially the growing Latino community in Trenton.

It also includes helping new businesses or initiatives. The two say that as larger companies are trying to build Trenton in one way, they have the boots-on-the-ground network to help in another. “What we’re doing helps community voices being heard,” Lewis says.

And then there is the billboard campaign. “If we can get the funding for another billboard campaign we’d want one on Route 1 heading into Princeton,” says Ingram. “We do great PR for the city.”
Website:
www.IamTrenton.org
​
Facebook:
Facebook.com/IAmTrentonCommunityFoundation